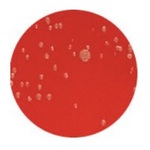 Bartonella henselae is a hemotrophic microorganism belonging to the genus Bartonella. It refers to a representative of the class of alpha-proteobacteria.
The bacterium infects human red blood cells. In the chronic course, endothelial tissue of the microcirculation system suffers. The source of infection can be sick animals (or carriers), more often rodents, dogs, cats or monkeys.

Bartonella henselae belongs to grams (-) bacteria, which looks like a shortened stick under the microscope, with approximate dimensions of 0.4 by 2 mm. In the context of the affected tissues, the bacterium may look curved, medium-sized, pleomorphic. Microorganisms tend to gather in small groups (clusters).

Round varieties of Bartonella have a diametrical size of about one and a half millimeters. They may have flagella and a three-layer structure, with a small genome size.

Currently, scientists identified 25 species of Bartonella are known, but only half of them can be dangerous to humans.

Bartonella henselae is the most common species, which causes an acute course of the feline scratch disease, lymphadenopathy, and angiomatosis. It is considered an obligate aerobic by nutrition. One can become infected with the bacterium through contact through damage to the skin or through the mucous membrane of the eye.

Once in the body, Bartonella continues to develop on top of cellular structures, penetrates the red blood cells and endothelium of blood vessels and the endocardial layer. A typical feature of Bartonella is its ability to activate cell proliferation of the endothelium and an increase in capillaries, which can cause excessive vascular proliferation.

Bartonella is an aerobic-heterotroph bacteria. Before it enters the mammal’s body, the bacterium can be cultured inside insects (lice, mosquitoes, fleas), or on a nutrient medium of solid or semi-liquid consistency, with the addition of up to 10% of blood elements.

Bartonella can remain viable for quite a long time in the discharge of lice – up to 1312 days. At the same time, bacteria do not cause any symptoms in lice.

In the organisms of cats or dogs, Bartonella can persist for more than 12 months, and inside insects – for life.

The duration of the incubation period with Bartonella henselae is 15 to 40 days, less often – up to 90-100 days.

The course of the disease includes two stages. In the acute period (the so-called Oroya fever stage), the temperature rises to 102° and even to 104 °F, and the fever does not subside for 2-4 weeks, after which the symptoms subside slowly.

In addition to a febrile condition, the following symptoms are observed:

Hemorrhages can occur on the surface of the skin. Sclera may be yellow, against the background of the enlarged liver.

In severe cases, the disease can end fatally (in about 20% of patients). The most favorable outcome is expected upon the onset of the latent stage, which after 90-180 days is transformed into a period of skin rash (stage of Peruvian warts). This period is characterized by the formation of spots, tubercles, nodules on the skin: this stage can last 8-12 weeks.

Diagnostic procedures are performed after the patient is placed in an isolation ward.

Often, the presence of the bacteria can be suspected if the patient indicates recent contact with the animal (especially if there have been scratches or bites).

To confirm the diagnosis, the doctor will definitely prescribe additional studies. For example, he or she can send blood, tissue elements, or secretions from pustules and papules for analysis.

The cultivation of Bartonella on a special nutrient medium is actually complicated and lasts at least 14 days of incubation (sometimes up to one and a half months) until the first isolation. Among other things, if the bacterium is not present in the blood, then isolating it becomes even more difficult.

In most cases, serology on Bartonella, or rather, on its antibodies, has the highest diagnostic information content. There are two ways to conduct a serological test – an enzyme-linked immunosorbent assay and fluorescence analysis. If specialists find antibodies like IgM in the course of the study, then this indicates an acute course of pathology. Such antibodies can be in the bloodstream for more than three months from the time of infection. The type of IgG antibodies can be determined only after 6-7 months from the moment of infection. In about a quarter of patients, IgG antibodies can remain in the bloodstream for more than 12 months.

The main purpose of diagnosis is to detect Bartonella in the tissue structures of the patient. As a rule, the following main steps of the polymerase chain reaction are used for diagnosis:

The analysis for Bartonella henselae is very specific but infectious disease specialists determine its sensitivity as 43-76%. Isolation of the bacteria from the elements taken during the PCR reaction is equivalent to the level of technical isolation of the culture.

To treat an infection caused by Bartonella, antibiotic therapy is prescribed in all cases:

At the stage of exacerbation, doctors successfully use intravenous infusions. Additionally, fluoroquinolone preparations can be prescribed.

As an adjunct treatment, it is appropriate to use blood transfusions, anti-anemic drugs, as well as drugs to maintain liver function. Such drugs are often combined with vitamin therapy (tocopherol, ascorbic acid, cyanocobalamin, folic acid), taking cytochrome-C, cyto-MAA, etc.

Prevention measures include restricting personal contact with rodents, stray cats and dogs, and preventing them from entering the house. In case of accidental contact, wash your hands with laundry soap under a sufficient amount of running water. If there are scratches and abrasions on the skin, they should be treated with a solution of hydrogen peroxide or any alcohol solution.

Prophylactic antibiotics are considered inappropriate, as well as prophylactic treatment of animals.

In most cases, the prognosis for patients infected with Bartonella henselae is relatively good unless the patient is not given medical attention for any reason. Signs of infection can sometimes be observed for several months, while complications develop only in extreme cases. After adequate antibiotic therapy, the bacteria is eliminated without repeated relapses.