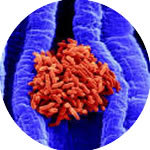 Burkholderia pseudomallei is a type of gram-negative motile rod-shaped bacteria of the genus Burkholderia. It is pathogenic to humans and animals and causes melioidosis.

Melioidosis occurs in some countries in Southeast Asia (India, Sri Lanka, Philippines, Indonesia), Central and South America, Australia and the island of Madagascar. The causative agent refers to the pathogenicity group II.

Burkholderia pseudomallei was first isolated by the English captain Alfred Whitmore in Rangoon (Burma) in 1911 from opiate addicts who died from melioidosis and described in 1913 under the name Bacterium pseudomallei. In 1957, Haynes and Burkholder transferred the causative agent of melioidosis to the genus Pseudomonas. In 1973, Palleroni divided the genus Pseudomonas into 5 homology groups according to RNA-DNA hybridization, where Pseudomonas pseudomallei was included in the number of 7 species of group II. In 1993, a group of researchers from Yabuti, Kosako, Oyaizu, Yano, Hotta, Ezaki and Arakawa isolated the genus Burkholderia based on the analysis of 16S rRNA, DNA-DNA hybridization, and the composition of the cell wall fatty acids.

Burkholderia pseudomallei is gram-negative straight or slightly curved bacillus of a size 2-5 × 0.4-0.8 microns. It is movable and has several flagella. The bacterium does no form spore and capsules.

It is chemoorganoheterotroph, aerob, oxide positive, soil saprophyte. It lives everywhere in soil and groundwater.

When melioidosis appears among animals, patients are isolated, rooms are cleaned and disinfected, measures are taken to prevent infection of people.

Melioidosis was first described in humans in 1912 in Rangoon by Whitemore and Krishnaswami. In 1913, Fletcher described the disease of guinea pigs and rabbits. In 1915, Babas isolated a culture of the causative agent of melioidosis from horses. Later it was isolated in sheep (in 1949) and goats (in 1954).