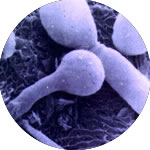 Candida albicans is a yeast-like fungus that is a representative of the normal microbiota of human skin and mucous membranes, which under certain conditions causes superficial or invasive (systemic, visceral) candidiasis. The genus Candida includes other species (C. glabrata, C. dubliniensis, C. krusei), however C. albicans is the most common species that have the greatest clinical significance.

When Candida albicans is under the control of the immune system and balanced with other bacteria, it poses no problem to the body. But when these fungi get out of control and begin to grow, various symptoms appear, including allergies, fatigue, headaches, bloating, digestive upsets, vaginitis, arthritis, muscle weakness, joint pain, nasal congestion, chest pain or tightness, blurred vision, hypoglycemia, multiple sclerosis, Crohn’s disease, foggy thinking and many others.

The spread of the disease is promoted by the widespread use of antibiotics, the use of refined carbohydrates and yeast, impaired immunity due to exposure to environmental toxins, poor nutrition and lifestyle.

Candida albicans produces up to 180 different toxins that can affect the liver, hormonal balance, impair immunity and cause cravings for sweets. A healthy immune system maintains the balance of Candida with other microorganisms on the mucous membranes but under certain conditions they begin to grow, get out of control and get into the circulatory system.

Often Candida albicans is the cause of oral and genital infections (thrush), as well as candidal onychomycosis (fungal infections of the nails).

Serological tests are based on the detection in the blood of immunoglobulins of various classes produced by the recognition of microorganism antigens by the human immune system. There are certain patterns in the development of the immune response when interacting with any microorganism, including yeast-like fungi of the species C. albicans. Upon initial contact with C. albicans, immunoglobulins of the IgM class are formed earlier than other classes, which reach the highest titer compared to immunoglobulins of other classes during primary infection and are used as an indicator of primary infection. Then, specific IgG class antibodies appear, and the enhanced growth of Candida on the surface of the mucous membranes leads to the synthesis of specific IgA class antibodies.

Many people are “healthy carriers” of C. albicans. Yeast fungi can be detected in approximately 60% of healthy adults in the oral cavity and in 12% of women in the vagina. Colonization of the skin and mucous membranes of C. albicans is also accompanied by the development of an immune response and the formation of immunoglobulins. Thus, antibodies to C. albicans can be detected in the blood of many healthy people without candidiasis. Therefore, the test does not allow to differentiate “healthy carriage” from a clinically significant disease. Due to the lack of specificity, the antibody test is used as an additional test for the diagnosis of superficial candidiasis and is inferior to methods such as clinical examination and smear / scraping microscopy after treatment with KOH.

Determination of IgA antibodies enables early diagnosis of infection; allows a doctor to diagnose the active or chronic stages of infection, therefore, it can be used to monitor the dynamics of serological changes during etiotropic pharmacotherapy of candidiasis and subsequent control of the patient’s cure, to assess the strength and quality of the body’s immune response to the activation of the fungal pathogen.

There are many antimycotic drugs used to kill Candida albicans. The choice of treatment depends on the severity of the disease and the prevalence of inflammatory processes within the reproductive organs. In most cases, women are prescribed:

In severe cases of the disease, the following drugs can additionally be used:

Antibacterial agents are used in cases when pathogenic microbes join a fungal infection. A high risk of developing a mixed infection is associated with a decrease in local and general immunity. After stopping inflammatory reactions in the reproductive organs, they often resort to physiotherapeutic treatment aimed at restoring the integrity of damaged tissues and improving blood circulation in them.