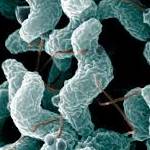 Campylobacter is a genus of gram-negative bacteria. Representatives of the genus usually look curved (in the form of a comma) or s-shaped.

Campylobacteria are mobile. They usually survive in low oxygen environments. Under the influence of atmospheric oxygen, Campylobacter bacteria can turn into a spherical shape. They are best developed at 107 °F.

Survival at room temperature is poor, but they can survive for a short time at cold temperatures – up to 15 times longer at 35°F than at 70° F. The bacterium slowly dies out at freezing temperature and is sensitive to heat: cells are destroyed at temperatures above 118°F.

The first species (subsequently referred to campylobacter) were first described in 1886 by Theodor Escherich.

The genus Campylobacter was described by the scientists of Sebald and Véron in 1963.

Campylobacteria are characterized by high virulence: the infectious dose for humans is only 500 bacteria; even contamination of about 4 CFU / g of meat can be dangerous for a person. The most important source of infection is agricultural and domestic animals, birds (including waterfowl), and rarely people. The transmission mechanism is fecal-oral; transmission routes are food, water, contact-household or sexual. Cases of the disease are recorded throughout a year, but more often in the summer and autumn months. Transmission factors are a variety of food products (poultry, beef, pork, milk, and others) that have not undergone sufficient heat treatment or are secondarily contaminated due to a violation of cooking technology, non-compliance with storage conditions and shelf life of products. Vacuum packaging of food products, semi-finished products and ready-made meals contributes to the survival of campylobacter and even (under favorable temperature conditions) their reproduction.

Campylobacters do not have the ability to survive in the environment for a long time in contact with oxygen, but they are well preserved in the aquatic environment at low temperatures. Diseases arise from the consumption of raw water from open reservoirs contaminated with campylobacter, as well as from emergency water supply networks contaminated with sewage discharges, sewage from meat processing plants, poultry, and livestock facilities. The household route of transmission is realized through direct contact with infected animals (especially chickens), which often show asymptomatic carriage of the pathogen. Science knows cases of transmission of the pathogen by contact-household route among family members or in specialized closed medical institutions, which is explained by a low infectious dose of the pathogen.

Today, 32 species are included in the genus:

The observed features of the geographical distribution of campylobacteriosis are determined not by the true incidence of the population but only by the level of organization of laboratory diagnostics, which in many countries and regions is either absent or insufficient. Microbiological diagnosis of campylobacteriosis is based on the isolation of a pure culture of the pathogen from feces, vomit, and washings from the stomach by inoculation on blood or erythritol agar with iron-sulfite-pyruvate additives. For species differentiation, campylobacters are cultivated at various temperature conditions.