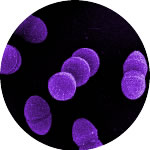 Enterococcus faecalis is a type of enterococcus that is part of the normal microflora of the human digestive tract, as well as some mammals.

Fecal enterococci in the food industry

Fecal enterococci, like other enterococci, are used in the food industry, which uses the ability of enterococci to hydrolyze lactose, ferment milk, effectively suppress pathogenic bacteria in the food itself, as well as their high resistance to acids, salts and high temperatures. Various strains of fecal enterococcus are widely used in the manufacture of various varieties of cheese and dairy products. For this, non-pathogenic strains of enterococcus feces are used, initially selected for these purposes.

Bacteriuria – the presence of bacteria in the urine – may be a sign of inflammation in the urinary tract, bladder, kidneys. In the absence of any symptoms, true bacteriuria (urinary tract infection) is diagnosed if there are at least 105 microbial bodies in 1 ml of freshly released urine, otherwise, it is assumed that urine is contaminated when it is collected. If there are symptoms or catheter urine is taken, the diagnostic threshold can be significantly reduced. Often, bacteriuria is not accompanied by any symptoms. In this case, it is called asymptomatic bacteriuria. At the same time, bacteriuria is often combined with symptoms of cystitis, pyelonephritis, prostatitis, urethritis, and also occurs in pregnant women. Asymptomatic bacteriuria does not always require immediate treatment.

Enterococcus faecalis in the taxonomy of bacteria

According to modern concepts, the species Enterococcus faecalis belongs to the genus Enterococcus, which is part of the Enterococcaceae family, the order Lactobacillales, class Bacilli, type Firmicutes, Terrabacteria group, the kingdom of Bacteria.