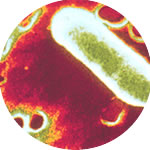 Haemophilus influenzae (or Pfeiffer’s bacillus) is a type of gram-negative bacteria and the causative agent of serious human diseases. It is a fixed ovoid rod-shaped coccobacillus, size 0.2-0.3 per 0.3-0.5 microns. It is located singly, in pairs and in clusters, sometimes it forms a capsule. The bacterium has no flagella.

The source and target of the defeat of Haemophilus influenzae are only human. Most often, the reservoir of infection is bacteria carriers or patients with acute respiratory diseases occurring in a mild or clinically unexpressed form when they are not isolated. The carrier frequency in the population of healthy children is from 60 to 90%. The frequency of carriage of capsule-free forms of Haemophilus influenzae among healthy young children is slightly less than 50%.

According to the structure of K-antigen, all known strains of Haemophilus influenzae are divided into 6 serotypes (A-F). The main epidemic hazard is Type B serotype (often referred to as HiB).

The infection caused by Haemophilus influenzae is a serious medical problem due to the significant spread of its various clinical forms, frequent generalization, severe disease with frequent complications and a mortality rate of up to 30%. Most often, Haemophilus influenzae is an etiological factor in the occurrence of purulent meningitis, pneumonia, epiglottitis, otitis media, arthritis, cellulitis, pyelonephritis, conjunctivitis in debilitated individuals, mainly in infants and the elderly; often the disease takes on a generalized character.

Long-term clinical and bacteriological monitoring revealed that the microbial spectrum in chronic bronchopulmonary diseases in children during the exacerbation period is mainly represented by two pneumotropic microorganisms. At the same time, Haemophilus influenzae is the dominant causative factor of the infection process, accounting for 61–70%, of which in 27% of cases it is associated with Streptococcus pneumoniae.

An acute infectious disease, clinically manifested by hoarseness and stenosis of the respiratory tract (up to asphyxiation), is epiglottitis, the etiological factor of which in most cases is Haemophilus influenzae, type B.

Pneumonia is a form of acute respiratory infection affecting the lungs. With pneumonia, the alveoli of the lungs are filled with pus and fluid, which makes breathing painful and limits the flow of oxygen.

Pneumonia is the single most important infectious cause of child deaths worldwide. In 2013, 935 thousand children under the age of 5 years died of pneumonia. It causes 15% of all deaths of children under 5 years of age worldwide.

There are several ways pneumonia can spread. Bacteria, which are usually present in the baby’s nose or throat, can infect the lungs when inhaled. They can also spread by dropping by coughing or sneezing. In addition, pneumonia can be transmitted through the blood, especially during childbirth or immediately after it.

In children under the age of 5 years with symptoms of coughing and / or shortness of breath, with or without fever, pneumonia is diagnosed with rapid breathing or retraction of the lower chest, if the chest is retracted or retracted when inhaled (in the chest of a healthy person expands when enhaling).

Haemophilus influenzae is a very common causative agent of community-acquired pneumonia, especially in patients with previous pneumococcal vaccination and the presence of concomitant respiratory tract pathology. The severity of the disease and the presence of chronic liver disease are risk factors for a lower incidence of an early clinical response to therapy.

Bacterial pneumonia can be treated with antibiotics. A preferred antibiotic is amoxicillin in dispersible tablets.

Haemophilus influenzae in the taxonomy of bacteria

Haemophilus influenzae remains highly sensitive to ampicillin, amoxicillin, azithromycin, chloramphenicol, aminoglycosides and cephalosporins II – III generations. Almost all strains of Haemophilus influenzae are resistant to antibiotics such as oxacillin (84%), oleandomycin (97%), lincomycin (100%), which indicates the inappropriateness of their use in these cases.

According to a group of researchers who performed a multicenter prospective study, beta-lactams (amoxicillin, ceftriaxone, cefotaxime, ceftibuten), macrolides, levofloxacin and moxifloxacin are the most active drugs in relation to Haemophilus influenzae. Despite the high activity of tetracycline and chloramphenicol against Haemophilus influenzae, the use of these drugs should be limited due to the low safety profile. Given the low activity of co-trimoxazole, this drug is not recommended for empirical treatment of infections caused by a hemophilic bacillus.

In addition, there are complex vaccines designed to prevent a number of infections, including those caused by Haemophilus influenza, for example: