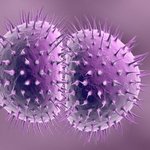 Neisseria – a stain of gram-negative coccoid bacteria. The stain got its name in honor of the German dermatovenerologist and bacteriologist Albert Ludwig Sigesmund Neisser (1855-1916). He discovered the causative agent of gonorrhea (1879).

Neisseria is found in the stomach of healthy people (when there are no Helicobacter pylori in it in a dominant rate).