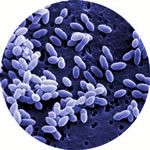 Streptococcus pneumoniae is a gram-positive encapsulated bacteria distributed throughout the globe. Pneumococci are relatively stable in the external environment. In dried sputum, they persist for 1-2 months, on infected diapers for 1-2 weeks. When boiled, they die instantly at a temperature of 50-60 °C for 10 minutes. Pneumococci are highly sensitive to conventional disinfectant solutions.

Streptococcus pneumoniae is the most common (20-60%) causative agent of a dangerous disease – community-acquired pneumonia, which accounts for 5% of deaths. In addition, Streptococcus pneumoniae can cause human diseases such as otitis media, acute purulent sinusitis, rhinitis, laryngitis, bronchitis, meningitis, sepsis, osteomilitis, septic arthritis, endocarditis, peritonitis and others.

Streptococcus pneumoniae is the second (after Haemophilus influenzae) in terms of the prevalence and importance of the pneumotropic microorganism in the microbial spectrum for chronic bronchopulmonary diseases in children during the exacerbation period.

Why is pneumococcus dangerous?

For whom is pneumococcus dangerous?

Since each person encounters many different types of pneumococcus throughout life, the mother also transfers protective antibodies to the newborn baby. Pneumococcal infection is rare in the first 6 months of life. But it is common in the age from 6 months to 3 years, from 6 to 11 months is critically dangerous. At this time, not only the risk of the disease is highly probable, but also the risk of severe, deadly manifestations of pneumococcal infection (pneumonia and meningitis are most relevant) are observed.

Another special risk group is elderly people (over 65) because of the age-related characteristics of the immune system.

You should also list a number of conditions (factors, features) that cause an increased risk of pneumococcus, regardless of age:

Streptococcus pneumoniae in the taxonomy of bacteria

According to modern ideas, the species Streptococcus pneumoniae belongs to the genus Streptococcus, which is part of the Streptococcaceae family, Lactobacillales, class Bacilli, type Firmicutes, Terrabacteria group.

The following antimicrobial agents are active against Streptococcus pneumoniae: