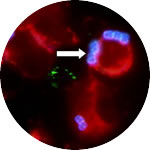 Streptococcus suis is Gram-positive bacterium. It is peanut-shaped. These bacteria a pathogen found in pigs, predominantly. Thibacterium is wide-spread in nearly all countries with a pig industry. S. suis causes also a zoonotic disease. It is capable to transmit from pigs to humans.

S. suis can infect humans if they care about infected pig or take meat. Not to be infected, it is recommended not to take pigs if you have cuts and abrasions on their hands. Human S. suis infection can be severe. It can be manifested in the following diseases: meningitis, septicaemia, endocarditis, and deafness as possible outcomes of infection. There are no confirmed evidence for fatal cases caused by these bacteria.

The natural channel of S. suis bacteria in pigs is the upper respiratory tract. It usually enters the body through the tonsils and nasal cavity, and genital tracts. An individual pig can carry this bacteria in the nasal cavity. Less than 5% of people suffer from diseases caused by this bacterium. These diseases are non-transferred.

The main approach to detect Streptococcus suis was defined when using magnetic glycoparticles. The bacteria consists of an adhesion protein for the carbohydrate sequence Gal-1,4Gal. After connection with different amounts of the pathogen, magnetic concentration and ATP detection, bacterial rates were down and equal to 10^5 cfu.

The first symptom in pigs is pyrexia. There may be sudden deaths of pigs. There may be also found the following diseases: respiratory disease, pneumonia, nasal secretion and respiratory difficulties. Meningitis may be caused which signs may be severe. It may vary from tremors to convulstions and death. Pigs may suffer from joints pain. Skin disease is another symptom. Reproductive disease can be caused by this disease.